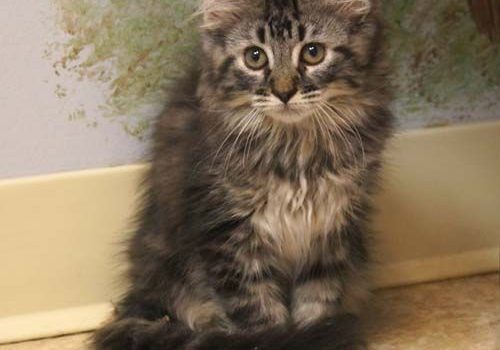 The Maine Coon cat is a social, friendly breed who gets along with children as well as other animals in the house. The reputation of the breed is well earned and is a good basis to decide if a Maine Coon cat would suit your family. However, a breed standard is only a guideline. Individual cats sometimes develop behavioral issues, the most common of which are marking territory with urine and aggression. These can be triggered by a lot of different factors, and require patience and understanding from the pet parent. Addressing aggression or insecurity in cats can be difficult unless you are prepared to introspect and make changes in your home. To truly end behavioral problems, you have to first find out why your Maine Coon is acting the way he is.

Cats mark their territory with scent. While urine is widely known as a feline marker, cats also use brushing against things and scratching to get their scent on some surfaces[1]. The idea is not just to claim the area as their own but to indicate their presence to other animals. In the wild, the age of scratches on tree trunks can accurately tell the observer how long ago a cat had passed by that route. Cats also have scent glands on their cheeks and flanks. This is why your Maine Coon enjoys rubbing his face and his body against you so much. To all who have the heightened senses to note, your cat leaves a reminder that you belong to him.

This adorable, possessive display takes a somewhat annoying turn when you find that your Maine Coon has been drenching couch cushions, walls, and carpets with his urine. Cats will always mark their homes in some way, but when they resort to excessive peeing to establish territory, the reasons can be one of three things[2]:

While every cat parent can claim to have suffered the occasional scratch or bite, Maine Coon’s in general tend to be quite careful with their claws and teeth. If your cat has started regularly biting or scratching people – whether it is through rough play or suddenly, for no discernable reasons – it is not something to be ignored. Most pet parents assume that the tendency will fade, but tolerating an unacceptable behavior is the same as encouraging it in your Maine Coon. They’ll learn that it’s an approved way to express themselves.

[1] What to Do If Your Cat Is Marking Territory

How to Properly Raise a Maine Coon Kitten

How to Minimize Your Maine Coon’s Shedding