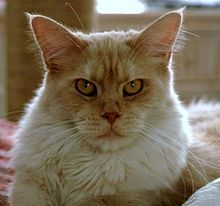 Confused about which cat breed to buy? Being an ultimate cat lover, it’s hard for me to differentiate among the better breed or to classify one breed as the best amongst all. However talking to a few friends and relatives, I realized that most people are confused as to whether they should buy a Norwegian Forest cat or a Maine Coon cat (maine coon norwegian forest cat mix) love both of them because they are extremely furry and have their kind of personality. However, I will be giving a brief about both of these cats to make it easier for any individual to decide the best cat which suits their liking.

Norwegian forest cat may be more expensive than Maine Coon cats specifically because they originate in the northern Europe and are adapted to the extremely cold climate. Since they are becoming extinct, they are tough to find and have to be imported mostly especially when it comes to Karachi or other cities of Pakistan. This breed of cat has a very glossy fur coat with makes it stands out when placed with other cats and adds to its beauty. Furthermore, it has long hair which can easily shed water because of the type of climate it is born in with a thick undercoat made of wool like material to protect it from extreme cold.

Along with the first fur coat, it has the forest cat known for its big bushy tail, long legs with adamant claws and a big sturdy body which make it capable of climbing mountains and to travel difficult terrains. They are friendly animals which have a very soft voice and like to mingle with their owners. They are more intelligent when compared to other cat breeds and demand attention at times. Since they are very social, they like spending most of the time outside playing with their cat friends and hence are relatives of the Maine Coon cat sharing similar characteristics.

They are found by only specific dealers in each country since they are gradually becoming extinct over the years and are tough to find. They have a lot of energy, but their average life is 14-16 years with kidney and heart diseases found in their breed commonly. These are known as Norway’s national cat, and those found in Europe are larger. Known as warrior cats and the only mythical creature among cats they are great to keep as pets since they are very royal and have a loving personality.

If you ever do get in touch with any cat supplier selling these be sure to at least see them once because they are a very different kind of beauty in itself. Incase your savings do add up to a significant amount considers spending it on buying this as the experience will be worth it.

Coming to how Maine Coon cats are and why you should have them as pets. Since they are related to the forest cats, hence they are also very humungous in size and have valuable hunting skills, different from other cats you might come across. It is one of the oldest breeds In the world and is one of the most popular ones around the world. It is the official state cat in Maine and is known for its soft and silky coat as well as for the long bushy tail it has which it carries around proudly mostly using it to cover itself. It is the only cat which has five paws.

Also,it’s known for liking water which is a very strange thing because cats usually hate the sight of water let alone how difficult it is to give them a bath. However because of their origin and their place of birth they are known for liking water. They have round fluffy ears and although their size might be intimidating for some people their attitude towards other people might make them loveable. They love interacting with people around them be it small babies or other pets and hence are known as family cats.

They also are widely known for providing therapy to individuals who are depressed and are good to keep as therapy cats as well. They are also very social and love roaming outside with their friends;especially the male Maine Coon usually socializes while the female is known for staying aloof and interacting only with its owners. They need a lot of attention and may be very curious at times when they see humans around them doing something new hence might be intrusive at times.

They can be trained easily and are smarter than other cats. Although very difficult to keep because they want lots of space and might get easily annoyed if they don’t get their personal space however if you are looking for a friendly cat then this is the one. It will easily sense if its owner is annoyed and might go away at times but they are one of the most affordable kinds.

Their upkeep is not very difficult nor is it very expensive, and since they need a lot of attention, this is not a difficult task. They are not prone to a lot of diseases, and hence, you don’t have to take them to the vet quite often unless it’s time for their monthly checkup. Maine Coon cats might take a lot of time adjusting to new surroundings or new people around them but once they do get used you will realize that they are the cutest pets you could have come across.

So, which Cat Breed to buy?

As I mentioned earlier [Maine Coon Prices] I find it tough to choose between any one specific breed since any cat I get my hands on is equally cute for me however if you are looking for a family cat which you could keep to yourself most of the time then Maine Coon cats are the best for you however if you want a cat which has an arrogant nature and is very sturdy then you know which one to buy.

History of The Maine Coon Cat