Pets are not just animals to us but part of our family and our best friends. We move to them when we’re happy or need a long warm hug. They’re ones who provides us with social support during hard times when we are sad and need someone just to be there for us. There are around 88 million cats as pets in America as compared to dogs, and therefore, their popularity is undeniable.

Maine Coon cat is the oldest and most natural domestic breed of cats which is found in Maine, North America, as the name suggests. The physical appearance of Maine Coon Cats is distinct, making them stand out from other cat breeds. They’re called gentle giant cats as they are large and sociable at the same time. This cat is also famous for its hunting skills due to sharp running and wild mind.

This breed has been famous because of the specific cat shows, and Coon Cat competitions were done in the 19th century. They’re truly the heart of North America due to their darling looks and amazing social capabilities. Being the darling of Native America made it the official cat of the state and is now the most famous breed of the Maine. This gave rise to the amazing competitions where the best Coon cats participated with their owners and got rewards of best Coon Cats.

Many stories and myths are surrounding Maine Coon cats which make these Native American cats an important topic to talk about. 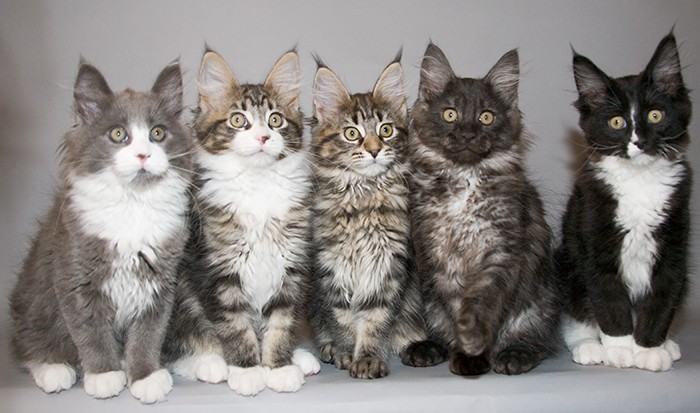 Being the oldest cats of the town, the origin of this breed not easily known to anyone. Though there are many tales and stories associated with Maine Coon Cats. One old origin story states back to 193,  the times of Queen of France, who was executed. She was called Marie Antoinette and was planning to escape from France.

While traveling to America, she took all her possessions and her lovable Turkish Angora cats in the ship with the help of her follow Captain Samuel Clough. When she was traveling, she got caught and was executed. It is believed, that her cats reached America and bred together with some short hair breed which resulted in Maine Coons.

We, as human beings have a habit of digging things when we don’t know the real origin or reason to it. There are many genetic or trait-based origins discussed as well. The idea goes back that Maine Coon cats are ancestors of raccoons due to the brown tabby color and a brushy tail which raccoons have. One more origin reaches back to the idea that they grew by a combination of wild bobcats.

Cat shows have always been a source of entertainment for all cat owners as it gives them a chance to showcase the beauty they had with them. The first show which was hosted for Maine Coon cats was by some farmers in Skowhegan Fair where they named the contest a “Maine State Champion Coon Cat”.

Moving forward, there was a show in Boston in 1985. A female Maine Coon cat named Cosey (shown right) which was owned by Mrs. Fred Brown, who won the competition for First North American Cat Show. There was silver collar which was won by Cosey, and she was awarded as the Best Cat in the Show. Doesn’t it look adorable with this award by its neck? 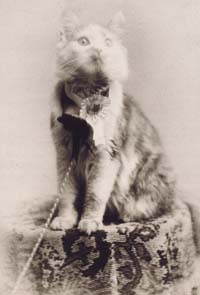 Maine Coon Cat was always called the glorified “Barn Cat” but after this competition, it grew and became the CFA finalist. After winning, the cat got much popularity and was part of everyone’s home until the 20th century when its place was taken by some new long-haired breeds which were mostly Persian.  The decline of Maine Coot Cats was severe, and it was thought that the cats have become extinct.

In the 1950s, an association was formed by some lovers of Maine Coon Cats named as Central Maine Catt Club (CMCC). This group was made to bring back the beloved cats of North America.

Recently, we have observed that the largest number of participants at Cat shows are Maine Coon Cats; showing that their owners still love them and want to showcase them. These cats mostly get The Best Cat award in one particular ring or the whole show. How many of the cats shows have your cat participated in?

Maine Coon Cats are amazing pets due to the intelligence and wittiness they possess in themselves. They can be trained in different forms and therefore, are also described as some dogs. Cats have always been seen as an end to privacy and Maine Cats are just the same. They will stick to you in all your situations and will never give you alone time.

One important habit of Maine Coon Cats is its love for water which can be very fun and enjoyable too. They can spend hours playing in the water; thus, if you hate washing clothes or dishes, this pet because will make the tasks a lot more enjoyable for you.

If you’re buying one of your Maine Coon Cats, you should know that these cats love attention therefore, they would want you to groom them all day long. Make them feel like a princess and train them for shows, they surely will make a great pet!

Maine Coon Cats are the national cat of North America and after the immense efforts done by some cat lovers, they’re easily available to everyone. They can be bought at the age of 12 weeks onwards when they become stable enough to be with you. Before adopting, you should make sure the cat has gone through all the tests.

If you’re finding a mate for a Maine Coon Cat, you can get them at any CFA breeder in North America as these cats are quite famous.

These cats are available in a variety of colors and bushiness depending on which one do you like the best. The color combination can go up to 75 which is a huge amount.

Providing them with proper nutrition is critical as they’re very active and would require regular food. We advise you to get a proper nutritional plan for your cat from a specialized physician, but we can still provide you with some information.

These cats need a lot of protein based diets as they’re full of energy all day. You can provide them with either dry or wet food. Dry food is preferred most of the time because the quality of dry food will help reduce the tartar which is present on your cat’s teeth.

Don’t give grains to your cat! Feeding your cat with grains will cause her to get fat which will decrease the activities and make it lousy. Also, make sure that this cat should be given food in a plastic bowl as it is allergic to other materials.

Maine Coon Cats have always been the most popular cats in the town, and if you want a cat that has starred in Harry Potter movies, that’s a Maine Coon Cat too.

If you own one or wish to get one of them, make sure you provide them with the utmost attention, good nutritional food and care and they will be the most enjoyable pet you ever had.