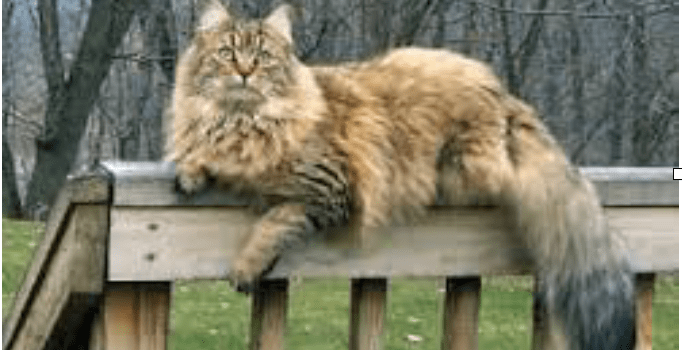 Maine Coon cats are extremely social beings. As a breed they are best known for their easy adjustment into households with children and other animals. They establish relationships quickly and focus on getting comfortable in their new homes. But each cat is an individual. Their genes and previous experience with other animals will play a large part in determining how well your Maine Coon gets along with the pets in your house.

Ideally, you should bring home a well socialized kitten or cat, who has been exposed to other animals and has no negative association with them

[1].  However, not all breeders are responsible enough to invest time in training and socializing kittens before selling them. You may also decide to bring home a rescued Maine Coon whose history with other cats and dogs is not well known. You should also consider that while your new adoptee might be perfectly happy to meet and befriend your house-pets, your dogs and cats might want no part of him. The sheer size of a Maine Coon might make your cat feel threatened, or your dog feel like they have competition.

So, despite the Maine Coon breed’s natural tendency to get along with all other animals, it is ultimately up to you to successfully introduce and integrate your new cat to the furry brood at home.

This is not as difficult as it may initially seem. It’s important to understand that the first meeting and what you do in the days immediately after that are crucial in setting up trust and positive association amongst both your house pets and your Maine Coon adoptee. This is where most pet parents make basic mistakes that cost them much peace of mind subsequently. If you go in knowing the risks and are willing to spend time and effort into making the introduction between the animals as smooth as possible, your new Maine Coon will be an established part of the family before you know it.

Pet parents are often impatient about introducing the newest member to their pets. Some also subscribe to the notion that animals should be left to their own devices to fight out their differences

[2]. This tough love method of introduction is based on the idea that animals have hierarchies to establish, and the only way for them to do so is to let them meet and play out their initial aggression.

However, this is where the theory falls apart. Unlike the wild, where animals respect each other’s territories and only cross over for hunting or mating, humans create an unnatural situation where we force a new cat to infiltrate another animals’ space, while suddenly expecting our own pets to give up their territory to an unfamiliar creature without any preliminaries.

While some cats are excessively dominant and some excessively submissive, most cats fall in between and, depending on the situation, can be bossy as well as a pushover. Needing to maintain a perpetual state of aggressive dominance is neither healthy for your pets nor natural. In a well-adjusted household, each individual pet will have their own threshold of what they will tolerate from other cats, dogs, or humans. Unless something disturbs the balance, the only fights to break out will harmless ones, engaged in play. But to reach that state of peace, your house-pets should be given ample opportunities to gauge how they feel about the new addition, while your Maine Coon is given time to get comfortable with living in a territory occupied by other animals.

So, before bringing home your Maine Coon cat, decide on a room that will be off-limits to your other pets

[3]. Try to choose a room with a window since your new cat will be spending much of the first few days in there.

Have your pets confined before entering the house will your Maine Coon. Allow your new pet to roam as much of the house as possible without letting your house-pets see the cat. Once your Maine Coon has satisfied his immediate curiosity, take him into his designated room and let your pets free. Allow them to investigate this new smell thoroughly, but keep the door to the Maine Coon room closed. Once your Maine Coon settles into his new room, take some pieces of clothes of toys that smell of your house-pets and leave them with him, while placing something that smells of your new cat in the space where your own animals are.

For the first week, never let either side see each other. The rules of a successful introduction follow the progressive steps: smell, sound, sight

[4].If your pets have established meal times, your work will be much easier than if they are used to being free-fed. With known meal times, cats and dogs have most of their attention already engaged to the task of getting their food. Their internal clock is more punctual than any watch in the house. That attention to food can work in your favour in this first step.

During meal times, feed your house-pets and your Maine Coon on both sides of that closed door. The gap under the door should be all the access available to them to the other side. Don’t place the bowls flush against the door. Engage a family member to help you and put down the bowls a good six feet away. With their keen senses, they will know that there is an unfamiliar presence on the other side. Depending on how brave your house-pet are and how fearless your new Maine Coon is, you’ll quickly realize how close they’re willing to get to the door. With each day, try moving the bowls a little closer. When they are eating inches from each other with just the door separating them, you’ll know you’re ready for the next step[

5].With smell and hearing out of the way, you can now let your house-pets see their new friend for short durations. Use a baby-gate in place of the solid door during meal times, drape a blanket over it, and leave just enough space at the bottom for your cats and dogs to get a glimpse of the Maine Coon on the other side. The reason you do this during meal times is because that is when they’re least likely to pay attention to the distraction of having a stranger eat only a few feet from them.

For the final stage, you keep the meal-time introductions as a stress-free way for them to get used to each other, while adding a more intense session a few times a day. In these sessions, introduce your Maine Coon to your house-pets one at a time. Again, have a friend or a family member help you keep both animals engaged during these supervised meets. If you have a dog, be sure to have him on a leash for the first few days. No matter how good natured he might be, there is always a chance that a new animal in his territory might force his instincts to over-react. You want to avoid any unpleasant interactions as much as possible. Instead, focus on keeping the two animals in either corner of the room, engaged in play and paying no attention to each other[

6].Once your house-pets are familiar enough with the new Maine Coon addition to eat their meals with ease and ignore him when in the same room, you can let them mingle more often and for larger amounts of time.

The Maine Coon breed of cats make it very easy to introduce them into a multi-pet household. Their impressive build and natural confidence makes it easy for them to build relationships with everyone they live with. But it is still important to be respectful of your pet’s territory and takes things slow when introducing a new animal into your home. The time and patience you invest into the first weeks will help you avoid

How to Introduce a Second Cat

HOW TO INTRODUCE TWO CATS