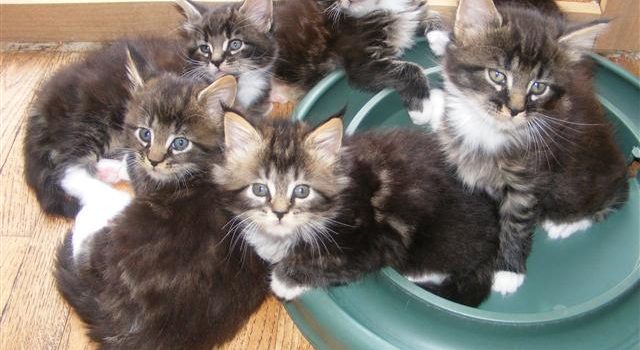 If you are a cat owner yourself, or you have a friend who does, or you are a wildlife photographer, or if you simply are a follower of the National Geographic; you might probably be aware of the fact that the Main Coons are the largest domestic breed of cats all over the world. In fact, it wouldn’t be an exaggeration to say that the Maine Coons may be the only domestic cats that you probably might have come across because they are the highest number of domestic cats that are bred in households, despite the fact that sometimes even their owners are unaware of their type; after all, not everyone has an eye for the pedigree.

Interestingly, the ancestral history of this popular breed is unknown, and a number of legends and myths are attached to the idea of its origin. Indigenous to the land of Maine in the New England, United States; these cats are thought to have migrated from either Great Britain or Europe. As the stories have it, the long-haired breeds brought from the foreign lands came to the US and mated with local short-haired breeds to produce a hybrid that we know of the Maine Coon cats.

The Maine Coon cats have certain unique physical features that set them apart from other cat breeds. They are distinctively long-haired or medium-haired, with hairs longer on the stomach and shorter around the region of head and neck. A tuft of long hair protruding from their ears in an inside-out fashion is one of their typical features. They have fluffy and thick coats to protect them from cold in winters. The coat colors are varied in nature with brown being the most common of them all. However; lilac, chocolate, and lavender are some unacceptable colors in the Maine Coon breed. Almost all eye colors, with blue being an exception, are found in this particular breed.

The Maine Coons have a strong bone structure and a rectangular body shape. While not at all overweight (as some breeders like to call them), the Maine Coons do have a tall and broad physique. Their body is specifically adapted to cold and harsh conditions. An average male cat weighs about 7.05 kg while an average female cat weighs about 4.5. Bear in mind that it is only the average weight of both genders and these cats can be heavier or lighter.

A normal Maine Coon Cat can potentially grow up to be 25 to 41 cm with its tail reaching up to 36cm. The long and bushy tail is another of the survival features of these cats as they characteristically seem to wrap their tails around them during winters to keep themselves warm. Although being domestic in nature and requiring special care from their owners, the Maine Coon cats are naturally adaptive of rough and tough conditions whether it is cold, snow or water.

Very little grooming is needed for them as their coats are water-resistant and almost maintenance-free. In general, the Maine Coons depict a strong will to live. According to one study, 74% cats live for ten years, and 54% survive for as long as twelve and a half years. Feline hypertrophic cardiomyopathy, a disease of the heart, is the most common cause of death in these cats.

Did you know that the Maine Coons are known as ‘gentle giants’? Did you know why? Well, if your mind is hinting at the word friendly,you are right.These cats are very friendly and extrovert. They are more intelligent than other breeds of cats, and therefore, easy to train. Loyalty is also an appealing attribute found in these cats which have earned them the title ‘the dog among cats

‘Maine Coons are unanimously adored and admired by their owners all over the world for their playful and energetic nature. They are fond of people and love to hang out with their owners. They are known to be friendly towards strangers as well. But that’s not all. There’s more to their good-natured behavior than you would normally expect in a cat to possess. While they are sociable, they do not cling on to their masters. While they would always be around, they would not irritate you by licking your feet all the time.

As they quite famously say about the Maine Coons, they are people-loving but not dependent. Maybe their survival characteristics and physical strength explains that. Generally, Maine Coons are not seen as timid pets. They have an almost majestic aura about them as if they (however unlikely as it may sound) seem to know how much they are adored. Their gait itself is statuesque, but not intimidating. While males appear to be somewhat people-pleasing, the females are remarkably poised.

The Maine Coon cat breeders are not just natives of Maine but are found all across the globe. A cat breeder is a person who breeds cats for the purpose of owning as well as selling. Since the Maine Coon is a natural breed and breeders do not crossbreed them with other breeds of cats, the pedigree, and genealogy of a Maine Coon can be easily traced.

If you are interested in buying one, you should ask the breeders to show you pictures of the cat’s ancestors or information about the place where it was originally brought from. The Maine Coons are easy to maintain since they are not either overly-dependent or annoying as some pets may be. Maine Coon cat breeders are aware of the fact that these cats largely feed on aprotein-rich diet. Hence, they survive best on meat.

A good breeder should know that grains should be avoided in their diet because of its disease-causing potential in cats. A Maine Coon cat is especially attached to its breeder or owner while being friendly towards other members of the family as well. The Maine Coon cat breeders are fortunate when it comes to grooming the cat since there’s nothing much to do.

They are easy-going and calm about everything they do from shaking snow from the coat off to playing with their owners. You will not need to worry about their well-being all the time. A Maine Coon will not be a reason for your troubles. In fact, it will always be-be around to release your problems.You might as well be living with a friend than a pet.

How to Tell if Your Maine Coon is a Mix?